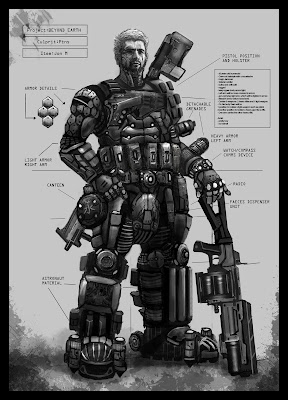 main character.
armour detail was inspired by heath ledger's
joker's shirt in the interrogation scene
in dark knight.
lil homage to D09 and Alien there as well... 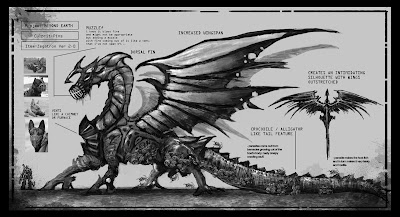 the dragon...
it's got parasites growing on it
making the creature fiesty and very much angry
for no apparent reason due to the itch.
got that idea from neville page when he spoke about the cloverfield creature.

when i was doing this, the image for TDKR's bane had just been released by Warner Brothers and i was thinking of putting a muzzle on the dragon.
so that the audience or player can wonder
what sort of giant had put it on the great beast.
like some scope of imagination.

i thought that was so original until i realised that the gifted designers of
Harry Porter Movies had already done it with one of their dragons.
i only realised that when i bought the art book... 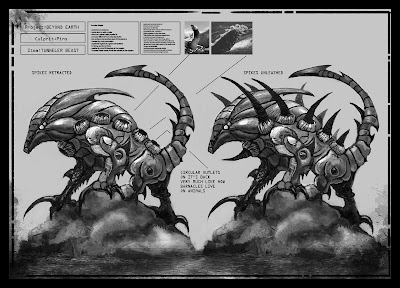 some concept designs i did for ButterBrains Entertainment
for a games pitch consisting of a main character,
a tunnelling beast and a dragon.

much thanks to Tang Chze Kang for the opportunity,
i'm lucky to meet many such like minded clients.
felt very much like a collaboration process
where different ideas were thrown in.

Beyond Earth © ButterBrains Entertainment and Tang Chze Kang
Posted by pins at 10:58 AM

if you have a story
you want to share
drop me a line at
pins.work.at.studio.rum@gmail.com
so what did you draw today?
: )

PLEASED TO MEET YOU

HAMMER OF THE GODS

WHERE THE WILD THINGS